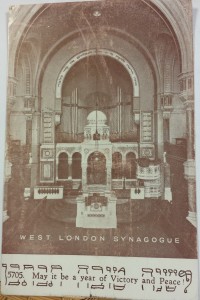 Shabbat Shalom. It is really a truly great honour and privilege to be standing here this evening with you and speaking from this pulpit. Thank you for the warmth of welcome and to my colleagues for being generous with their time. I am excited to meet so many of you and hope you will not be shy in coming forwards to introduce yourself and hard to offend when I do not immediately remember that we have already met! Michelle, my wife, is also looking forward to opportunities to meet you and our two daughters are thrilled to hear that daddy has a new synagogue for them to visit. But I’m sure you’ll hear and see more about them all in good time.

Now I know tomorrow is going to be a particularly special and magnificent service – I’ve seen the enormous preparation that has been put into it, but let me pick up a theme which might not have been touched on.

Some 175 years ago, actually in May, something new arrived on the scene. It did not have so much a revolutionary impact, but took a growing and changing world and simply moved things on forever. It was born into a world of the Second Industrial Revolution with a world that had ridden the crest of the first massive development of industry and was now on the cusp of the expansion into the drilling of petrol, the internal combustion engine, the radio, and advances in electrical engineering. It is of course, the first ever adhesive stamp – the Penny Black.

As I saw the news of this anniversary flash up in the google doodle last month I thought, ‘What an amazing reference point for West London Synagogue’. The stamp of course has gone through its own changes and developments but actually, what fascinated me was how it was a response to a changing world of communication and how much things have changed since. It’s not that we’re no longer communicating – but that our late 20th and early 21st century has been revolutionised by changes in our sense of where we situate ourselves in the world, how, what and why we communicate and so on.[1]

What we know is that people still need to connect, to fulfil their social need to communicate and build their relationships with one another. We still connect – we just do it differently, over continents with people we meet online or on holiday or family we rarely see, in 140 characters, with apps on our phones equipped with instant cameras and videos. Technology is different, but the human condition and the human need is not so different.

Now if I may dip my own toe into the history of the human condition for a moment. It was some 75 years ago that a young man, recently arrived from Frankfurt am Main, who had left life in Germany in 1933, proved he was determined to join the British army and found himself in the Pioneer Corps down on the South Coast. His background in the family business meant he was partly in the kitchens, but he would eventually serve in a tank in the Kings Royal Irish Hussars when the Kings Most Loyal Enemy Aliens were finally approved for front line duties.

This young man wrote to his rabbi, in a letter, requesting some help. He and a few others wanted to arrange for High Holy Day services for their fellow Jews down, we think in Ilfracomb. This actually followed permission from the Colonel to hold the services in a local church, which he was ordered had to be preceded by a formal parade through town. His rabbi agreed to send him Tallitot, Machzorim and a Shofar, but couldn’t commit to a Torah scroll. In return the young man sent a thank you note and 10 shillings for the expenses. For even such a small amount the rabbi sent a thank you. The rabbi, one Rabbi Reinhart, also sent a High Holy Day postcard to him in September 1944 that read “May it be a year of Victory and Peace”.

You see my grandfather on my mother’s side, whose family joined here after being persuaded by an old school friend, persuaded my grandmother to attend too. He had been granted leave and took my grandmother for Shabbat services – in those days if you had leave from the army of course you attended synagogue! My grandmother, also a German Jewish refugee who were then members of a newly growing Edgware United, describes it as a revelation with the choir, organ and men and women sitting together.

It was here that my grandparents were married. During a small amount of leave in 1944 (leave by that time was highly restricted – D Day which we remember today was but a few months away) my grandfather convinced my grandmother to marry quite hurriedly – and in a sign of romance he kept the telegram from her (that other old fashioned communication method) which read:

AGREE TO WEDDING THURSDAY ARRANGING EVERYTHING

It was under the auspices of this synagogue my parents were married too. My parents then went on to be a founding members of the Radlett Reform Synagogue, where I grew up.

But returning to my grandfather, this was a most beloved Jewish home for him and it is therefore an even greater honour to now be serving as one of the rabbis here. And I shall always be reminded of the great importance of duty of the rabbi, even in that simple letter and parcel – enabling Jews to live Jewish lives, empowering them with the skills and tools to practice their Judaism, dare we say, independently of the rabbi but powerfully connected to the chain of tradition and the enveloping world of the People of Israel. That is, in many respects, what I hope my work will also bring to this community – in education and learning for adults. I shall be heard to say two things regularly – if you’re not learning, developing and growing Jewishly in an on-going way, then how can we have the chutzpah to think our children will value it. And secondly, with my grandfather’s example in mind and to adapt a phrase from Citizens UK community organising – ‘we can’t do what you can do for yourselves’, so get learning how to do.

And so 175 years of a synagogue is incredible. But even more exciting is where the next 175 years takes us as a community. That is a remarkable journey and history. Brought into existence in the year of the Penny Black, this synagogue is proof positive not only that the human condition is similar but that as Jews we still need community, communication, a grounding in Judaism and a holding in times of trouble and space for the sanctification of moments of joy. The Synagogue is not a technology like the adhesive stamp, it is the very foundation for human life – community and spirituality. But what is sure is that the next 175 years will probably bring as much rapid change as the last and we will be responding all the time. Thinking of the future you’ll hear more about my work I’m sure and the launch of the Lyons Institute is shaping up for November 2015 to be a very exciting prospect. I am thrilled to be part of the evolution of this wonderful Kehillah Kedoshah – holy community. May God give strength to us all in our yearnings for the future, and let us say: Amen.

[1] The irony was not lost on me that as the Penny Black anniversary was noted, the company Whistl made it’s announcements about redundancies. More than that, my daughter was learning about the postal service in her reception class and her homework was to see a post-box and visit a post-office. Now in the extreme, this is almost a history class, because let’s face it she should have gone to a high-speed internet and mobile phone hub to really know how we send messages these days.

[…] my sermon on Shabbat evening I mentioned two things I would repeat over and over: If you’re not engaging […]

I’m a rabbi who has a world view of the goodness of most people – they just want to live in peace and security, with food on the table and a roof over their heads. Read more…

Pebbles on the Beach

A sermon in memory of my father Paul Janes, whose first Yarzheit (in the Hebrew calendar) was this week. We made it to Penarth whilst on holiday. It was a moment of peace after the Read more…

It was December 2012 and the Conservative Minister for Civil Society, Nick Hurd MP, suggested that wealthy pensioners (or at least those with enough income) could give their winter fuel payment to charity instead of Read more…

Any cookies that may not be particularly necessary for the website to function and is used specifically to collect user personal data via analytics, ads, other embedded contents are termed as non-necessary cookies. It is mandatory to procure user consent prior to running these cookies on your website.